Greater Glasgow and Clyde Hospitals to Screen for MRSA 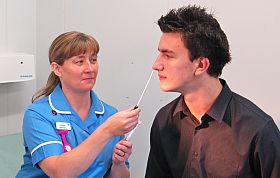 By January next year every patient coming into an NHS Greater Glasgow and Clyde (NHSGGC) hospital for a planned operation will be screened for MRSA before being admitted.

Other groups of patients who will be screened include; all elective and emergency admissions to care of the elderly, renal, dermatology and vascular surgical specialties.

The Royal Alexandra Hospital in Paisley will be the first of our 10 acute hospitals to begin screening with the Glasgow Royal Infirmary, Gartnavel General Hospital, the Western Infirmary, the Southern General, the Victoria Infirmary, Vale of Leven Hospital, Stobhill Hospital and Inverclyde Royal Hospital all following on between now and December.

The aim of the screening programme is to identify and treat patients that are positive and as a consequence reduce the risk of spreading MRSA.

Dr Brian Cowan, NHSGGC’s Medical Director, welcomed the move as part of the Board’s drive to reduce healthcare associated infections. He said: “Screening will allow us to identify people admitted to our hospitals with MRSA and thus minimise the risk of infections spreading.

“As part of the routine pre-admission process that patients currently undergo a simple nasal swab will also be taken to test for MRSA. If a patient is found to have MRSA present on either their skin or in their nose it will be treated with an eradication plan before the patient is admitted.”

MRSA is normally found on the skin or in the noses of some people and often there are no harmful effects – it is only when the MRSA enters an open wound that infections can occur.

The pre-admission screening will work in conjunction with the wide range of other initiatives that we have employed to drive down hospital infection rates. Our efforts are already achieving significant results with MRSA bacteraemia rates falling by 9% year on year since 2005/06.

The total number of hospital admissions that NHSGGC estimates it will screen for MRSA prior to admission is around 87,000 per year. In order for MRSA samples to be processed quickly we have invested the £1.3 million funding given to us by the Scottish Government in additional pre-assessment nursing staff and laboratory staff and equipment.

NHSGGC already screens certain ‘high risk’ patients for MRSA prior to admission. These include elective patients for orthopaedic and plastic surgery together with all admissions to ITU. In addition, local infection control teams also carry out targeted screening based on risk assessment. Target groups include elective surgical admissions to vascular, urology, neurosurgical, ophthalmology and HDU. Screening is also carried out on some medical admissions including haematology and oncology.

All boards in Scotland are moving towards MRSA screening. As the UK’s largest Health Board NHSGGC’s screening programme represents the biggest of its kind in the UK.