Southern General Nurse is an MBE 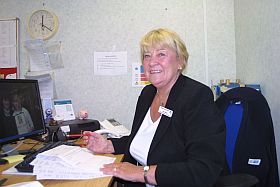 Nurse Judy Wilson, Moving & Handling Lead Practitioner for South Glasgow and Clyde has been recognised at the highest level with an award of an MBE.

Praise for her work has not just come from the palace, but First Minister Alex Salmond, Deputy First Minister and Cabinet Minister for health and Wellbeing Nicola Sturgeon, Andrew O Robertson OBE, Chairman NHS GG&C, Dr Kevin Woods, Health and Chief Executive NHS Scotland and Glasgow Lord Provost Winter are amongst other public figures who have sent letters of congratulations.

Based at the SGH Judy leads a team of 5 M & H Practitioners whose role includes the provision of mandatory moving and handling education and training (direct & indirect) throughout acute division South Glasgow and Clyde Hospitals. The aim is to decrease the risk of muscoskeletal injury from manual handling for both staff and patients by providing a safe environment in clinical areas and workplace. This is an important role considering that many nurses and Health Care Workers are forced to retire early because of muscoskeletal injury.

She began nursing in 1972 and trained at Glasgow Royal Infirmary before moving to the Institute of Neurological Sciences at the Southern General four years later. During her many years of nursing and caring for dependent patients she developed a special interest in moving patients with comfort, safety and dignity which became her mantra.

In 1995 she took up the position of Moving & Handling Adviser for the Neurosciences Directorate and in 1998 became the Moving & Handling Co-ordinator, SGH. This was a new role and the first to be implemented in the hospital. She developed training programmes for all grades of nursing staff and Allied Professionals, trained ward based staff to enable them to promote good safe practices and provided solutions for local problems. By working alongside nurses in the ward her knowledge, commitment and enthusiasm made Moving & Handling training relevant and credible and therefore more readily applied by nursing staff.

The outcome has been the availability of training for all grades of staff, the launching of a Minimal Lifting Moving & Handling Policy (2000) and the use of Patient Risk Assessment Tools as standard practice in all wards and departments. She has contributed to the Moving & Handling Agenda by presenting at both local and national conferences and has linked in to residential and care homes by offering advice and training on Moving & Handling activities resulting in a decrease of work-related muscoskeletal incidents for both patients and staff.

Working for the health service has proved to be a family affair, daughter Pamela is a Ward Sister at the Southern General Hospital and husband Hugh was a nurse at Dykebar Hospital before retiring. Judy was nominated for her honour by Marie Edwards, Lead Nurse at the Institute of Neurological Sciences, SGH and will receive it later this year.