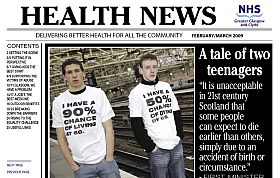 Scots students are embracing the “tackling inequalities” agenda as never before.

If we could reduce the differences in health by wealth, race and gender we would make a significant difference to Scotland's health status

Now there is new evidence that teachers and lecturers are hungry to explore in detail the variations in health status by income level, social class, ethnicity and gender with students as never before and senior Public Health professionals and researchers are hugely encouraged.

In response, the Board’s Director for Public Health and research colleagues from Glasgow’s Centre of Population Health have created a special “education pack” containing specific publications and DVD’s exploring the issues of inequalities and how they influence health and wellbeing outcomes …but more importantly explore how they can be tackled.

Professor Carol Tannahill, Director of The Glasgow Centre for Population Health said: “It is impossible not to be struck by the huge disparity in health experience between different geographical communities.

“I am also becoming increasingly aware that material poverty is but one dimension of health inequality.

“To achieve improvements for those with the worst health or who experience discrimination and disadvantage, services and interventions need to be more intensive and targeted. We need to take intensive action on the wide range of social and environmental factors that lead to health inequalities."

Dr Linda De Caestecker, Director of Public Health for NHS Greater Glasgow and Clyde, said: “Many important health problems are influenced by factors such as income level, employment, housing and education as much as health services and the government and public agencies need to do more to address inequalities that lead to poor health. “Students and educationalists need to understand these issues and be influencing ways that change can be achieved.”

NHSGGC Director of Communications Ally Mclaws said: “When the Health News publication on inequalities was printed and circulated we were hoping to help raise awareness of these key issues and of how existing inequalities and access to services and wealth influenced overall health.

“We did not expect the level of interest from the educational centres and the enthusiasm for more study material that resulted. Comments from teachers and lecturers were so enthusiastic we agreed to work with Public Health and Centre of Population Health researchers to create a more comprehensive education pack to send to those who contacted us.

“The pack includes NHS publications, online forums and two DVDs commissioned and produced by the Centre of Population Health.

“There is a huge amount of work going on within health boards and local government in this area and it is hugely encouraging to find such a hunger for material from schools and colleges as it augers well for the future as the next generation of adults and opinion makers will be entering the work place and influencing policy with a whole new ideology and understanding of the importance of toward Fair for All”.

Comments received following the initial NHSGGC Health News publication included:
“Excellent articles relating to the Higher Modern studies class. I also believe these articles are of great importance in educating our young people towards leading healthier lifestyles”.
“Excellent information, will use on their (pupils) health wall and PSE classes”.
“So bang on – it’s exactly what students need for their studies. Information is clear and easy to understand, up-to-date facts and figures”