Doctors Use Pedal Power for Charities 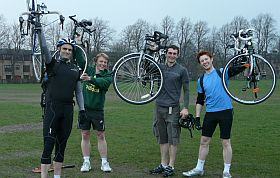 They have been inspired to join the 25-strong group following the stabbing in London of a friend of one of the other cyclists which left the victim paralysed from the neck down.

Doctors Andy Eggleton (24) and Paul Jones (25) who work at Glasgow Royal Infirmary, and Michael Mcginlay (24) and Rob Blum (28) who are based at the Royal Alexandra Hospital in Paisley, have been training hard to take on the gruelling 600 mile journey in only six days starting on May 24.

Andy explained: “We got involved in the project through a common friend, the story was so tragic and the problem of knife crime such a huge issue we felt it was a really worthy cause.

“Although the attack took place in London the story of knife crime and its victims is one particularly common to the West of Scotland, something we had all seen in our work.”

The training regime has included cycling trips to the Campsie Hills and gym sessions.

Andy admitted: “It will be a real challenge, especially as the majority of us have never cycled further than a paper round!”

Most of the fundraising cyclists are from London and are not employed by the NHS, but there is also a contingent of three doctors from Northern Ireland.

So far £35,000 has been raised and all proceeds will be split between Spinal Research which funds developments for treatments for paralysis caused by a broken back or neck, Aspire, a charity which supports people and families affected by spinal cord injury and providing ongoing care for the victim of this particular attack.