Chris is Over the Moon About His New Leg! 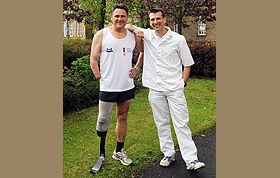 A “limb fitter” working for NHS Greater Glasgow and Clyde has been inspired by one of his patients to run with him in the Edinburgh Marathon for the first time later this month.

David Morrison is the Lead Prosthetist at Westmarc, the specialist rehabilitation unit in the grounds of the Southern General Hospital.

His patient is Chris Moon (47) who lost his lower right leg and right hand in 1995 when he was blown up while walking in a cleared area in Mozambique where he was clearing mines for a charity. Since then Chris, who received the MBE for his work clearing anti-personnel mines, has become a well-know motivational speaker, and has run around 50 marathons and raised hundreds of thousands for charity.

Since then Chris, who received the MBE for his work clearing anti-personnel mines for the trust, has become a well-know motivational speaker, and run around 50 marathons and raised thousands of pounds for charity.

David has been working with Chris since 2005 when he moved to Strathaven from England and has fitted both his “sprint” or cheetah foot and everyday foot, as well as his right hand.

This running foot is “L” shaped, made of titanium and held in place by a socket worn just below Chris’s right knee.

They cost around £1100 to make and can last two and a half years depending on how active the person is and the health of the limb they are attached to.

David said: “Chris does such a lot of running that he needs a limb at the high end of the spectrum.

“I’ve worked with active and sports people before, but never with someone like Chris.

“I had done the occasional 10k and fun runs, but never a full marathon. I’d been talking to Chris about marathon running and the fact that I wanted to do one.

“If it hadn’t been for him I would never have gone ahead, I wouldn’t have had the motivation.

“I think about Chris when I’m running and I feel I would have let both him down and myself if I didn’t do this.

“He ran his personal best in the London event this year and it is fantastic for me as a prosthetist to know that I helped him do this.”

David is running to raise funds for Disability Snowsport, a national charity he also volunteers with, which takes people with a disability snowboarding and skiing.

Chris, an ex-serviceman, is running for the forces’ charity “Help for Heroes.”

His remarkable life includes being one of the few westerners to survive abduction by the notorious Khmer Rouge regime, when he successfully negotiated not only the prevention of his own execution and release, but also that of Cambodian colleagues.

His fundraising feats include being the first amputee to complete the Great Sahara Run, the Badwater Death Valley marathon (in temperatures recommended for slow cooking chicken) and in 2000 jointly led a party climbing Kilimanjaro.

He said: “There is an element of a sense of achievement in doing this. My time for the London Marathon was just under four hours, which is exactly what I was hoping for.

“As I’m getting more used to the leg I’m hoping to better my times. My major fundraiser this year is to walk the West Highland Way.

“My request, when I met David was that I wanted to be able to run faster and run properly, and that is what I am doing now.

“It is an interesting relationship because I can’t do anything for David, apart from encouraging him to run marathons!”

Like all prosthetists and their patients, David and Chris have developed a strong bond, but when it comes to running they are true rivals and both are determined to be in front when crossing the finishing line on May 31!

Most amputees, for various health reasons, are not suitable for prosthetic limbs, and Chris qualified because he is extremely fit and an established runner.

Westmarc treats 51 per cent or 3000 amputees in Scotland, ranging from very young children to people in their nineties.
Ends