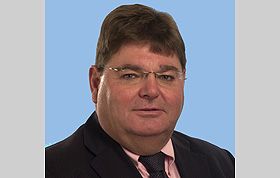 Chairman of the Board Andrew Robertson said: “Robert brings a huge wealth of NHS experience at the very highest level to this post.

“He has already made a significant contribution to the achievements of the Board as the Chief Operating Officer of Scotland’s largest acute hospitals division and as a key member of NHSGGC’s most senior executive team.

“This appointment follows a rigorous selection process which saw a very strong field of candidates vie for the post. I am delighted that I am able to announce Robert as our new CEO and look forward to working with him as we continue to progress our ambitious health improvement and service modernisation agenda.”

Mr Calderwood, who has more than 35 years NHS experience, said: “We are facing both exciting and challenging times ahead.

“This year alone we will open two new £100m hospitals and continue to drive forward the plans for a new children’s hospital and adult acute hospital on the Southern General campus. NHSGGC is also investing heavily in the development of community health and mental health services.

“I look forward to picking up the baton from the outgoing Chief Executive Tom Divers to complete these major projects but perhaps the biggest challenge of all will be to drive forward the health improvement agenda in partnership with national and local government.”

Robert Calderwood joined the NHS as an Administrative Trainee with Argyll and Clyde Health Board in May 1974.

In August 1978 he became Hospital Administrator for Greenock Royal and Associated Hospitals.

In March 1981 he was appointed Administrator, Acute Services, for Inverclyde District and in August 1984 he became Deputy Unit Administrator for all acute services within Renfrewshire.

In August 1988 he was appointed as Director of Property and Strategic Planning at Greater Glasgow Health Board. He became Unit General Manager for the Southern General Hospital Unit in April 1991 and became its first Chief Executive on achieving Trust status on 1 April 1993.

In April 2003, as part of the introduction of single system working across NHS Greater Glasgow, in addition to his substantive post in South Glasgow, Robert took on the role of Programme Director for the implementation of the Board’s Acute Services Strategy.

Robert will take up the post of NHS Greater Glasgow and Clyde Chief Executive on 1st April 2009.

ABOUT NHS GREATER GLASGOW AND CLYDE

• NHS Greater Glasgow and Clyde is the largest Health Board in the UK and covers eight local government areas.

• With an annual budget is £2.6 billion and more than 44,000 staff, NHS Greater Glasgow and Clyde provides services to a core population of 1.2million and specialist regional services to more than half the country’s population.