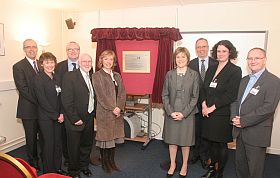 An innovative partnership of local authorities and health services in the west of Scotland which supports those who need assistance to live at home is set to be extended.

Providing a range of equipment for children and adults of all ages and needs across the Glasgow City, East Dunbartonshire, West Dunbartonshire, East Renfrewshire, Renfrewshire and NHS Greater Glasgow and Clyde areas, the partnership is about to be joined by South Lanarkshire Council. To mark the extension of the shared service, which will now cover 26% of the Scottish population, the partnership has agreed to adopt the identity Equipu.

Formerly known as the Greater Glasgow Independent Living Equipment Service (GGILES), the partnership has grown rapidly since it was originally founded by Glasgow City Council, East Dunbartonshire Council and NHS Greater Glasgow and Clyde in 2002. In line with this significant expansion, it was felt that identity of the partnership needed to be simplified and this led to the name Equipu being chosen.

Work within the partnership has also led to a near £1million investment in storage and recycling facilities at its distribution centre in Glasgow’s East End.

Nicola Sturgeon said: “I am delighted to be able to take the opportunity to open the new, expanded 'Equipu' service in Baillieston.

"Equipment and adaptations play a vital part in a joined up community care service, enabling some of our most vulnerable people to remain in their own homes, living independently for as long as possible.

"The new facilities here will not only enhance the quick and efficient delivery of equipment and adaptations to the people in the area but will also provide additional capacity and improved decontamination and
recycling facilities.

"Equipu is an excellent example of how partner organisations can work together to deliver real improvements and efficiencies in providing services."

Developing and improving the partnership has helped to deliver real benefits, both to the service users who need equipment and to the public purse. People receive the equipment they need more quickly thanks to a simplified system that allows a range of staff including community nurses, physiotherapists and occupational therapists to make assessments and directly place orders.

Substantial savings are also made as the single store for the partnership ensures there is much greater efficiency on the recycling of equipment that is no longer needed. Last year over 80,000 pieces of equipment worth £2million were recovered and reconditioned for future use.

Nick Kempe, Chair of the Equipu Steering Group, believes the launch shows what is possible when the public sector works in partnership for the benefit of a shared service.

He said: “Combining our resources through Equipu has allowed us to take significant step forwards with the provision of community equipment in all of our members’ areas. Greater coordination and economies of scale gives us the kind of advantages that would just not be achievable if we were all to work independently.

“We are now able to get equipment to where it is needed much more efficiently than ever before and this is reflected in the very high rates of satisfaction among service users.”

Andrew Robertson, Chair of NHS Greater Glasgow and Clyde, commented said: “I was privileged to be a part of the original launch of GGILES back in 2002. To see this grow into a service that enhances ever more people’s lives is a magnificent achievement.

“It is an innovative service that encompasses NHS Greater Glasgow and Clyde and our local authority partners. It offers real benefits to the service users and with the increased level of resource should allow greater continuity of access to very specific items of equipment which can be difficult to guarantee from a smaller level of resource.”

Councillor Elaine McDougall, Convener of Social Work Service said, “Glasgow City Council has been delighted to provide the Equipment Store on behalf of the other Partners and are very proud of the new state of the art facility designed and built with our Building Services”

Over 2800 health and social work staff have direct access to equipment via the web based ordering system. This figure will increase when South Lanarkshire Council join in April.

The purchasing power of the partnership allowed for 15% savings on social work equipment and 25% on health equipment on a spend of £2million last year.

In 2007/2008 86% of standard items were delivered on time. 95% of service users indicated they were satisfied or very satisfied with the overall delivery of equipment.