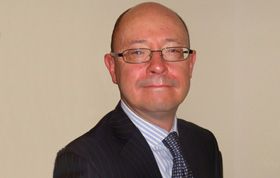 Staff at the Beatson West of Scotland Cancer Centre were last week introduced to a new Clinical Director following the retiral of Professor Alan Rodger.

Dr David Dunlop has been appointed in the new role of Clinical Director and took up the post last Monday.

Dr Dunlop is a familiar face at the Beatson and holds the Lead Clinician role for chemotherapy services. His new role will see him encompass managing medical services at the Beatson and working with other West of Scotland Boards.

Jonathan Best, Director of Regional Services is delighted David has been appointed as Clinical Director.

He said: “David’s experience within specialist oncology services and the work he has undertaken on chemotherapy services across the West of Scotland will enable him to meet the challenges ahead for cancer services.”

Dr Dunlop is looking forward to the new challenges this role will bring. He added: “The new Cancer Centre is a fantastic flagship for cancer services.

“I will also be working in partnership with regional services, and in consultation with the public, to develop the best ways of treating cancer patients effectively and quickly.”

Dr David Dunlop, having trained in internal medicine and medical oncology in Edinburgh, Calgary and Glasgow, was appointed as a consultant in Glasgow in 1995.

He is Lead Clinician for Chemotherapy Services, a role intimately involved in the re-design of chemotherapy services in the new cancer centre and in the surrounding region.

He is an active clinical researcher in lung cancer and is a member of the Board of Trustees for the Roy Castle Lung Cancer Foundation.

The Beatson West of Scotland Cancer Centre is one of the most advanced cancer centres in Europe and was officially opened by the First Minister, Alex Salmond and the Deputy First Minister, Nicola Sturgeon in February 2008.

The new £115million Beatson West of Scotland Cancer Centre in Glasgow is the lead
centre for delivering non-surgical cancer care across the West of Scotland and provides patients and staff with the most cutting edge equipment, treatments and surroundings to fight cancer.

More than 8,000 new patients will be seen at the Beatson every year which serves a population of 2.6million – more than half the Scottish population.

It boasts the latest state-of-the-art equipment and technology, including eleven modern radiotherapy treatment units, three radioactive source treatment units and MRI scanners. The first PET-CT scanner for the West of Scotland is also co-located beside the unit. This new technology allows doctors to map out cancer tissue more accurately and gives an early insight into how well treatment is progressing even before a tumour changes significantly in size.