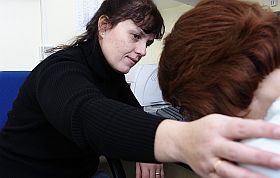 On average, a woman will withstand 35 incidents of domestic violence before reporting abuse to the police.

This disturbing fact is one reason why Scotland’s largest health board is launching the most ambitious system-wide early intervention scheme in the country to prevent domestic abuse.

NHS Greater Glasgow and Clyde’s Director of Public Health, Dr Linda de Caestecker, said that specialised early intervention training to key staff in hospitals, health centres and working out in the community was being extended.

Health professionals will ask patients about their experience of domestic abuse and other gender-based violence while in contact with patients regarding other health issues.

Dr de Caestecker said: “The scale of the problem is worrying and the fact that so many people – in particular women – suffer abuse for so long without feeling able to tell anyone about it must be tackled.

“That, on average, a woman will withstand 35 incidents of domestic violence before reporting tells us just how important it is to create more opportunities for professional and sensitive early intervention.

“This highly ambitious step by the Board will create a discreet opportunity for patients to raise domestic abuse with trained health professionals at an earlier stage than they might otherwise have felt able to before.”

Routine enquiries are already made within ante-natal services where women are spoken to separately from their partners.

The scheme is also being piloted in addictions services to find out if service users have suffered abuse or are involved in prostitution.

The Health Board’s gender-based violence lead, Kath Gallagher, says that the majority of women they have spoken to are comfortable about being asked these questions.

Kath said: “For many years we took the approach that adults who have had control over their lives removed by an abuser, got strength from choosing if and when to tell others about their experiences.

“We now know that survivors feel a sense of relief when the issue is raised by their GP or other health service worker.

“It tells them that this violence is not acceptable and sends out a signal that the health service understands the health and social problems that arise from abuse.”

If a woman does divulge experience of domestic violence an assessment of her situation can be made and support offered to protect herself, and children, if needed.

It’s not only the physical injuries that the women have to cope with, they may go on to develop depression, anxiety, trauma and other mental health problems.

For more information about how NHS Greater Glasgow and Clyde is tackling gender-based violence, log onto www.equality.scot.nhs.uk.

One in four women will be affected by domestic violence at some point in their lives, and it affects people of all ages, backgrounds, languages and abilities.

And according to separate UK figures more than 100 women a year are murdered by their partners or ex-partners as a result of domestic abuse.

Although there has been an increase in reports to police about incidents of domestic violence and sexual assaults, it is believed that the incidence is actually higher.

Together with rape and sexual assault, child sexual abuse, prostitution and forced marriage, it is one example of the different sorts of violence some men use to control women, children, and sometimes other men.