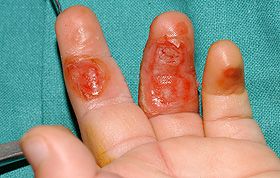 NHS Greater Glasgow and Clyde has today launched a major campaign to alert parents to the potential danger of hair straighteners.

The campaign is being rolled out in response to worrying statistics from the Royal Hospital for Sick Children (RHSC) at Yorkhill which show that in 2007 alone 36 babies and toddlers attended A&E with a burn from hair straighteners.

And in the first seven months of this year 28 young children have already required treatment for these injuries.

So serious are these burns that 11 percent of the children who have presented at the RHSC’s A&E with hair straightener burns this year have needed skin grafts.

Sharon Ramsay, Burns Nurse Specialist at the RHSC, has treated a number of children with straightener burns, she said: “Very young children, mainly in the 0-3 age group are picking up, sitting on or standing on hair straighteners. Injuries range from superficial burns to severe, deep dermal or full thickness burns.

“So far this year the RHSC A&E department has seen approximately 28 children and 11 per cent have required skin grafts resulting in a hospital stay, intensive treatment and a follow-up intensive regime of scar care for anything up to two years.”

18 month old Kayla Murray from Johnstone in Renfrewshire, is one of the toddlers that has been treated at the RHSC for hair straightener burns this year. Her mum Michelle Murray is backing the board’s safety campaign after her daughter went through painful skin grafts.

Michelle said: “Kayla’s accident happened on August 28 this year while family members were getting ready for a relative's wedding.

"I was at the hairdressers and my sister was in the kitchen helping relatives with their hair. Kayla managed to get into the kitchen where the hair straighteners were lying on a worktop.

"She pulled the flex attached to them and this brought the straighteners sliding down her arm and she tried to pull them off with her hand, which meant it also got burnt.

"The burns were quite deep and after treatment at the Royal Alexandra Hospital we were referred to Yorkhill and Kayla was admitted.

“She needed skin grafts for her right arm and thumb and still wears support garments and has cream rubbed into the burns four times a day, we're hoping she won't be scarred.

"What I would say to other parents is use straighteners in a separate room from where their children are, keep them well out of the way and the straighteners out of reach.

"Also, get a heat resistant bag for your straighteners. This is an accident that can happen to any family, people should be very, very careful with straighteners."

The Health Board have also teamed up with Strathclyde Fire and Rescue because not only do these appliances pose a risk in terms of burns, straighteners are also known to have cased UK house fires in the past.

Lesley Nish, NHSGGC Heath Improvement Officer is co-ordinating the campaign, she said: “Many people think that if straighteners are turned off they are safe. Sadly that is not the case at all. Straighteners become incredibly hot very quickly, with some reaching temperatures of up to 230 degrees and they can take about 40 minutes to cool down. It is actually at this point, when they are cooling down, that most children are getting burnt.

“It’s heartbreaking to see wee ones so badly injured, our campaign isn’t just about raising awareness but it’s also about trying to get people to switch off and store hair straighteners safely. As part of the campaign we are providing free heat resistant bags designed for straighteners to go into once they have been turned off.”

The campaign slogan is “Straight off, Straight in. Straight away.” Our message is simple says Lesley : “We are asking everyone to turn off their straighteners straight away, put them straight into the heat resistant safety bags and then put them out of the reach immediately.”

Garry Milne, Strathclyde Fire & Rescue's Area Commander for South Glasgow, said: "We support and commend this move by NHS Greater Glasgow and Clyde to reduce the risk of children suffering hideous injuries as a result of using hair straighteners.

"I should also point out that the improper use of straighteners is now to blame for a considerable number of house fires across the UK. Parents should ensure that their children are fully aware of the potential risks that run unless they take care and observe safety precautions when using these items."

The campaign to raise awareness of the safe use and safe storage of hair straighteners is also being backed by James Watt College in Greenock, which offers hairdressing courses, and the Royal Society for the Prevention of Accidents (ROSPA).

Nikkie Butters, RoSPA Scotland’s home safety development officer, said: “With hair straighteners likely to be a popular Christmas present this year, this campaign couldn’t have come at a better time.

“We all know that curious children love to get to grips with their surroundings by exploring and sometimes copying what they’ve seen mummy or big sister doing, but burns can happen so easily.”

The heat resistant bags can be obtained for free by parents and carers of 0-3 year olds from the Boots outlet at Braehead and NHSGGC health improvement officers will also be distributing them at Silverburn Shopping Centre on the 5th of December.

The bags will also be given out for free during Home Fire Safety visits by Strathclyde Fire and Rescue.

A longer term programme of distribution is planned via NHS Parent and Children Together teams, a number of Community Health and Care Partnerships, and selected hairdressing salons.

· Of the 36 young children who attended the RHSC A&E in 2007 with hair straightener burns 66% were boys.

· 14 were injured by hair straighteners which were on the floor

· One child was injured by straighteners that were on a bed

· Two were injured whilst their mother was holding the straighteners

· 23 sustained injuries to the hands

· 8 to the feet and the remainder were to the arm, face or buttocks