Think Fast and Reduce the Impact of Stroke! 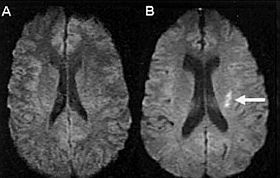 Taking four simple actions can make all the difference to people struck down by Scotland’s third biggest killer– stroke.

A brain attack, it is also the greatest single cause of severe disability in adults in Scotland. And this week, beginning Monday November 2, a campaign has been launched to make relatives, friends and work colleagues more aware of the signs of stroke by remembering the acronym FAST.

F stands for FACE. Can the person smile normally? Does their mouth droop?
A is for ARM. Can they lift both arms normally?
S is for SPEECH. Can they speak clearly? and
T is for Time, as in time to dial 999 if any of these signs are present.

“Stroke is caused by an interruption of the blood flow to the brain, by either a blood clot (thrombosis) or burst blood vessel (haemorrhage). As a result, brain cells are deprived of the oxygen and other nutrients, which they need. Some brain cells become damaged and others die. No two strokes are the same, and the symptoms depend on the area of the brain affected and the extent of the damage incurred.

“If the patient is to make a full recovery it is important that they receive medical treatment as quickly as possible to prevent further damage to the brain.

Delay can result in long-term disabilities such as paralysis, severe memory loss and communication problems.”

Age and general health has a bearing on whether someone has a stroke, but risks can be minimised by paying attention to risk factors such as high blood pressure, smoking, exercise, diet and alcohol intake.

“Recent improvements in stroke treatment have saved thousands of lives, and reduced the levels of disability suffered by many thousands more. Scotland – and Glasgow in particular – has some of the best stroke units in the world, and the Ambulance Service has trained all of their staff to use FAST.

“However, successful treatment depends on the patient getting to a specialist stroke unit as quickly as possible. If clot-busting drugs (thrombolysis) can be used, for example, they have to be administered within 3 – 4 hours of the onset of the stroke.

“This means that the public have to be made more aware of the signs and symptoms of a stroke, and to treat a stroke as an emergency. That’s the point of this campaign.”