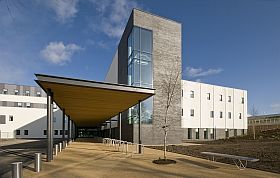 Yesterday (Thursday) in London the £100m state-of-the-art facility beat off stiff competition from entries around the UK to lift the “Building Better Healthcare” prize for the best hospital design.

It follows hard on the heels of the new hospital scooping this year’s sought after Roses Grand Prix award for the best new building outside London.

Robert Calderwood, Chief Executive of NHS Greater Glasgow and Clyde, expressed his delight that the new Stobhill Hospital has been recognised in two top national categories.

He said: “The new Stobhill Hospital, which opened to patients earlier this year, is large and airy with modern and uncluttered purpose built patient areas, consulting rooms and patient transport hubs. Patients and staff also benefit from the latest technologies installed in the new hospital including state-of-the-art MRI scanners.

“The “green” design of the hospital has a healthy regard for energy saving and has helped us graduate from the Carbon Trust’s Carbon Management Programme.”

Margaret Campbell, Commissioning Manager for the New Stobhill Hospital, added: “The commissioning team are delighted to have won this award for the best hospital in Britain.

“We’ve always known that this was a very, very good building, and we are absolutely over the moon to have received both of these prestigious awards.”
Ends