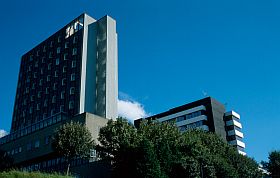 Leading clinicians from around the UK and America are gathering in Glasgow later this month to celebrate the legacy of the Queen Mother’s Hospital (QMH) at Yorkhill.

The Queen Mother’s will close early next year, with services relocating to the Southern General Hospital.

To celebrate this landmark hospital a special Scientific Meeting and Dinner is being held in the city on November 20 which will offer staff past and present the opportunity to listen to a series of lectures, exchange ideas and discuss their contributions to 45 years of excellence at the QMH.

Professor Alan Cameron, Consultant in Fetal Medicine at the Queen Mother’s will chair the event.

He said: “While the closure marks the end of an era, we wish to highlight the significant contributions made to maternity and obstetric care in Glasgow and the West of Scotland by the staff of the Queen Mother’s Hospital over the years.”

Any proceeds from the event will go towards establishing a Legacy Fund to be used for future educational events, which could include bringing together for discussions all health professionals in areas of maternity and paediatric care.
Ends.