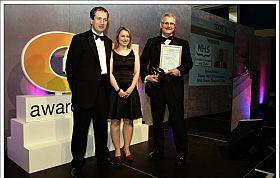 NHS Greater Glasgow and Clyde's Deputy Head of Procurment has been honoured nationally for his work.

It was awarded in recognition of his services towards delivering Capital Equipment projects within this NHS board.

Accepting the Award, Mr Stewart said: “I’m delighted and proud of the recognition both for myself and the wider team at NHS Greater Glasgow and Clyde. There have been huge improvements throughout the last couple of years culminating in the new Stobhill Hospital which was delivered to a high standard.”

The GO Awards Scotland, organised by BiP Solutions Ltd, are the only Awards dedicated to public procurement in the region. The Awards ceremony was held on the evening of the Scottish Government National Public Procurement Conference (28 October) at the Crowne Plaza hotel in Glasgow.

GO Managing Editor Grahame Steed believes that Scottish procurement professionals should be recognised for the demanding work that they carry out so successfully, and the GO Awards Scotland provide an excellent means of doing just that.

Grahame said: “The GO Excellence in Public Procurement Awards for Scotland have been a tremendous success, and once again underline the breadth and depth of talent both working within and supporting public service delivery within Scotland. Each of the highly commended and winning entries thoroughly deserves the recognition of their success at these Awards; and we congratulate them and the rest of the finalists for their achievement.”