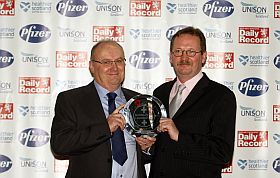 Six individuals from NHS Greater Glasgow and Clyde picked up a high profile honour at the Scottish Health Awards 2009.

The awards ceremony held in Edinburgh honoured NHS staff from across Scotland who had been nominated by patients, the public and other staff for their dedication and commitment.

NHS Greater Glasgow and Clyde had a total of 13 nominations, all of whom are equally important in delivering high quality health care for our patients.

The winners include Dr Kevin Hanretty, a consultant obstetrician from the Queen Mother’s Hospital. Dr Hanretty won the Women and Children’s Services Award after a thankful mother from Clydebank nominated him for saving her baby daughter’s life.

The woman had suffered five miscarriages before she fell pregnant with her daughter Amy. Throughout her pregnancy Dr Hanretty and his team monitored the mother and baby to deliver the best care and attention. At 30 weeks pregnant he discovered that they baby was not growing and was in serious danger.

Thanks to Dr Hanretty’s quick actions the baby was delivered prematurely and survived. His care for the mother and child didn’t stop after the birth as he personally organised for a transfer to an intensive care unit and continued to visit the family during the baby’s ten-week stay in hospital.

The couple were so grateful to Dr Hanretty that he received an invitation to attend the baby’s christening as a special guest.

A Glasgow health professional and scientist who has dedicated her life to finding a cure for chronic myeloid leukaemia is also another well deserved winner.

Professor Holyoake instigated and raised funds for a new cancer research centre in Glasgow, which is attracting visits from some of the world’s finest cancer scientists and clinicians. She has always been at the forefront of fundraising and is constantly visiting cancer wards to meet the patients that she strives to help.

Thanks to the work of Professor Holyoake and her team there are now new drugs to tackle theses cancers but without their hard work it would not have been possible to achieve these results so quickly.

Professor Holyoake was nominated for a Scottish Health Award by a colleague and cancer sufferer who wanted to see her achievements celebrated. He said: “She has given me, and countless others around the world, hope.”

Andrew Robertson, Chairman of NHS Greater Glasgow and Clyde added his congratulations to the winners. He said: “These awards are a fitting recognition of the diversity of the skills and commitment of individuals across the Board area and the rapport that they build up with patients.

“As well as this public compliment to their achievements I am very pleased to add my own personal congratulations to the six winners.”

The Scottish Health Awards are supported by the Scottish Executive and the Daily Record.

Photographs of all the winners and further information are available by contacting 0141 201 4429.