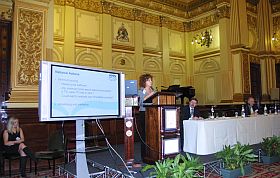 In a G8 style summit some of the most influential public sector policy makers in the west of Scotland are gathering today to step up the fight against the scourge of alcohol abuse.

Staggering figures show that death rates from alcohol misuse in the west of Scotland are at an all time high and by far the worst in Western Europe.

And with 45% of crimes committed by people under the influence of drink – the strong association between alcohol and violent crime can have a devastating impact on communities. A fact borne out by a survey in Glasgow which revealed that 99% of people asked said that alcohol is having a detrimental effect on their community.

Some of the most heavyweight figures across health, police, Government and local authorities in the west of Scotland are attending the summit which will explore new ways to tackle the blight of alcohol on our society.

NHS Greater Glasgow and Clyde Director of Public Health, Dr Linda de Caestecker, said: “The effects of alcohol misuse not only damage our health but have a devastating knock on impact on the fabric of our community. There is a strong association between excessive alcohol intake and violent crime, lost working days, and socio-economic deprivation. Reducing excessive consumption of alcohol is therefore one of the west of Scotland’s most significant public health priorities.

“We have been working to jointly fight alcohol abuse with some real successes, most particularly our focus on prevention and early intervention for those at risk of misusing alcohol and treatment for people e who already have significant alcohol-related problems. More still needs to be done however and that is what today’s summit is all about.”

Strathclyde Clyde Chief Constable, Stephen House, is also attending the summit. He said: “Alcohol is a significant factor across a range of criminal activity and is a major factor in violent crime. In addition to the direct impact on crime, alcohol is also a factor in creating a sense of insecurity and fear in communities across Strathclyde.

“Excessive consumption of alcohol lowers inhibitions and causes people to commit crime, it also increases vulnerability causing people to be victims of crime. Often alcohol is a common factor in allegations of sexual assaults. If someone is heavily under the influence of alcohol it makes them more vulnerable to this type of attack and it can also make investigating and prosecuting this type of crime more problematic.

“In order to deal with the unacceptably high level of violent crime in the West of Scotland it is essential that the excessive consumption of alcohol is curbed.”

Public Health Minister Shona Robison will speak at the event. She added: “This summit is a great initiative that gets to the heart of an issue affecting individuals, families and communities across the West of Scotland.

“Excessive alcohol consumption is one of the biggest public health challenges Scotland faces and it’s up to all of us to build a consensus to tackle it.

“The Scottish Government has put forward a package of bold proposals and we would call on everyone who wants to change Scotland’s drinking culture for the better to support them.”

Political leaders from Glasgow City, Inverclyde, Renfrewshire and West Dunbartonshire – the local authorities with the highest rates of premature death cause by alcohol will also take part.

Jim Coleman, Glasgow City Council’s Deputy Leader, said: “"Problems with alcohol are so deeply rooted within our communities that a major cultural shift is now required.

"We have no choice but to tackle this on a generational basis and that means raising awareness of the issues among our young people as early as possible.

"Glasgow is one of the few local authorities to undertake alcohol awareness work within our schools and this already being extended to include primary school children.

"The sooner we put across positive messages and set positive examples for our young people, the better it will be in the long term."