Glasgow medics hope to save lives by giving tumours frostbite 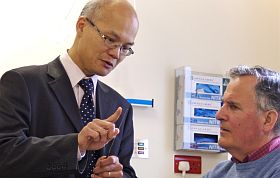 The procedure called Cryotherapy is available to Scots whose prostate cancer has recurred despite previous radiotherapy.

A specialist team based at NHS Greater Glasgow and Clyde’s Gartnavel General Hospital and the Beatson West of Scotland Cancer Centre are successfully freezing prostate cancer tumours using cryogenics technology. Once frozen the tumours are then thawed and the result is that cancer cells are shattered and killed – rather like the process of frostbite.

All this is done through the insertion of needles directly into the prostate – known as ice probes (usually 6-8 needles are used) –avoiding the need for patients to undergo major and risky surgery which is often not possible.

Since the new Scottish Cryotherapy Service treated its first patient in October 2008 a total of 13 Scots have undergone the procedure. So far follow up information has shown a satisfactory drop in the prostate cancer marker PSA (Prostate Specific Antigen) in all the patients we have tested which suggests a favourable response to Cryotherapy.

Professor of Urology and Surgical Oncology, Hing Leung, said; “Without intervention such as Cryotherapy, these patients will eventually develop cancer spread within five years leading to premature death. Not all patients are suitable for this treatment, but where traditional routes have failed Cryotherapy does offer real hope for patients.

“Basically when a patient comes to us their tumours are inoperable or if operable the procedure would be extremely invasive and very risky. Cryotherapy is minimally invasive and the results for cancer control have been extremely favourable for everyone we have treated.

“Our service is relatively new, so it is difficult to measure improvement in life expectancy among treated patients, however patients with prostate cancer are routinely monitored by a prostate blood test called PSA. Levels of PSA essentially give you a measurement of how much cancer there is in the prostate. So far all treated patients have achieved an undetectable level of PSA. These results are most encouraging and very exciting.”

Patrick Smith from Glasgow (67), a retired Professor of Mathematics at Glasgow University, was the fifth Scot to have Cryotherpay after his prostate cancer returned five years after initial radiotherapy. Since the treatment his PSA tests have shown undetectable levels of the cancer toxin. He said:” I was told that Cryotherapy had certain advantages over surgery, for example being less invasive and requiring a much shorter recuperation. In fact it proved to be pretty straightforward. A day and a half in hospital to have the treatment and a few hours in hospital a few weeks later. Within days of the treatment I was gardening again and getting on with life! No painkillers were need after treatment either.”

Patrick has experienced some side effects following the treatment and is currently being treated for these. He said: “I am coping with the side effects and am getting help for them but when you get cancer you’ve just got to get on with it. I feel very fortunate to have had this treatment and since having Cryotherapy I’m leading a normal life. The doctors here are too modest this really is something that is going to prove to be very useful.”

Professor Leung added: “Medics tried to use Cryotherapy for prostate cancer back in the 70s but results were poor as the technology controlling the temperature drop was imprecise, resulting in under treatment to the cancer and damage to the adjacent organs. Things have moved on greatly and now we are able to produce ‘frostbite’ accurately and effectively in the prostate alone without affecting the surrounding tissue too much and our ongoing research and development aims to make this treatment more effective and at the same time less risky for side effects.”

Cryotherapy is provided by the specialist team in Glasgow for patients Scotland wide.