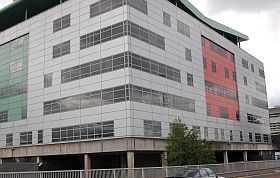 Following the transfer of twin babies from Stornoway to the Princess Royal Maternity in the early hours of this morning, both babies are stable and being looked after by a specialist neonatal team.

Dr Lesley Jackson, Consultant with the Neonatal Transport Service and Neonatal Medicine thanked everyone involved in airlifting the babies to Glasgow.

She said: “We became aware of a lady from Stornoway who had went into premature labour with twins about 6.00 pm last night. A team from the Neonatal transport Service flew to Stornoway to stablise the babies and bring them to Glasgow.

“Unfortunately the weather was extremely bad and it was necessary for us to liaise with the RAF who dispatched the military aircraft ‘Hercules’ to Stornoway to fly the babies to Glasgow.

“They arrived in Glasgow at approximately 6.30 am this morning and both babies, a little boy and a little girl are stable.”

A further condition check on the babies will be issued tomorrow, Tuesday, January 20th, at approximately 11.00 am.