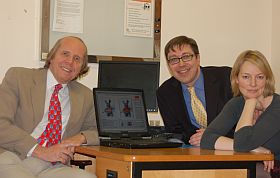 Software which can revolutionise the lives of visually impaired children has been developed by a team of NHS Greater Glasgow and Clyde (NHSGGC) medics.

Called Sight-SimTM, it involves taking a series of measurements of a child’s eyes, which are then translated into images on a computer screen allowing parents, teachers and medical professionals to see the world as the youngster sees it.

The groundbreaking idea was conceived by Professor Gordon Dutton, a Paediatric Ophthalmologist at the Royal Hospital for Sick Children, and then developed by NHS GGC clinical scientists Drs Ruth Hamilton, Michael Bradnam and Aled Evans, in collaboration with Dr Paul Siebert, a Computing Scientist at the University of Glasgow.

And the unique system has already received a prestigious Medical Futures Innovation Award in the ophthalmology category, where the medical team had to present their idea before a “Dragon’s Den” style of panellists.

The judges described the innovative use of software as “a much improved method over existing products on the market trying to do similar things,” and they added that “funded through the appropriate channels, this could have significant impact.”

Children with poor vision don’t know what they can’t see, however by using this software adults can amend the environment around the child.

For example changes can include making sure text and objects are bigger and brighter, route markers are in place to make climbing stairs easier, or in the case of parents and friends, simply standing at a distance where the youngster can not only recognise them, but also see the expression on their faces.

Professor Dutton, who has lectured throughout Europe and America, explained: “This can be life-changing for children because the beauty of this system is that it is tailored to every individual, this has never been done before.

“Eye care professionals spend a great deal of time and effort measuring vision and expressing it in numbers, and then send out letters to parents and teachers with information which they may not fully understand.

“Pictures are a very good tool for getting information across to people.

“This software, whether on a computer screen at home, in a doctor’s clinic or in the classroom, can simply reveal what the child actually sees after the adult has inputed the measurements contained in the letter.

“At school a visually-impaired child can take longer to complete exercises and homework and that leads to them staying behind to catch up.

“It’s not because they can’t do the work, it’s because the text and pictures need to be bigger, but not everyone recognises this.”

The team hope that Sight-SimTM can be soon be adapted and be made accessible for downloading by everyone involved with visually-impaired children.