Snowboarder Andy thanks WestMARC for helping him reach his potential

A World Cup snowboarder has become the latest ambassador for the WestMARC rehabilitation centre in Glasgow after they cared for him for the last eight years.

Andy Macleod was an active 18 year-old student living in Fort William and studying adventure tourism management in 2011 when his world abruptly changed overnight. While cycling on his way to a BBQ in a residential area he was struck by a car travelling at 67 miles per hour. Andy was very lucky to survive, but the accident did rob him of his right leg. He also suffered a brain injury with attention, concentration and memory issues too.

Andy (27) said: “I was stabilised in Belford Hospital in Inverness before being transferred to Glasgow Royal Infirmary, where I spent a month recovering. Three months after my accident I was referred to the WestMARC centre where I first met Prosthetist, David Morrison. I think I knew right away we would get along.

“David and I share a love of sport and adventure and right away I knew he ‘got’ me and my need to push myself to my limits. The care I have received has been fantastic and in total I have had three different made specifically for me, all with different functions.”

Before his accident, Andy had only been snowboarding twice – and now it’s become his world.

Andy said: “Now I am competing at a World Cup level for Great Britain, with a World Championship competition at the end of the month and World Cup Final at the beginning of April. The long term goal though is the Beijing 2022 Winter Paralympics!

“I really can’t speak highly enough about my care at WestMARC – as well as giving me the essentials to get walking again they have helped push me to my limits and I will always be grateful.” 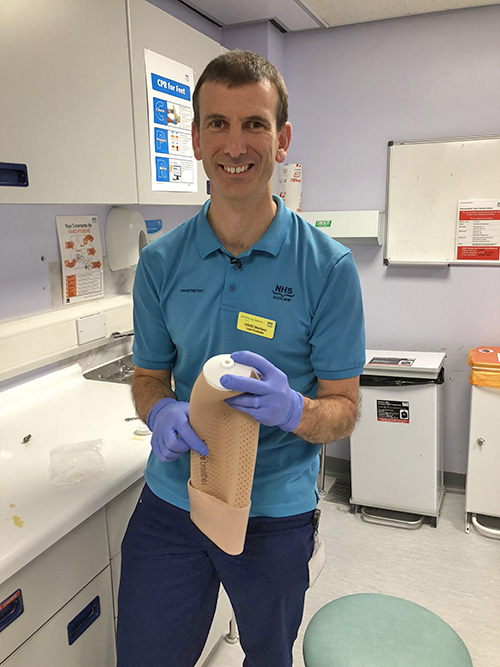 David Morrison, the Lead Prosthetist said: “To see someone as young as Andy following a traumatic amputation is very unusual. What I learned very quickly was here was a young man with huge potential to do so much; but first he had to learn to walk again.

“As a professional, it’s been great to meet someone like Andy who doesn’t just use his leg, but uses it to its fullest potential and beyond! I have seen him grow as a person and achieve so much as an athlete. I am so proud with how well he has done in snowboarding and glad I could play a part in this remarkable journey.”

And see him in action here: www.youtube.com/watch?v=ApviGs-6njw