Helping Take Some Of The Fear Away From Radiotherapy

When Joan Shard was diagnosed with cancer and faced three radiotherapy sessions a day for 12 consecutive days, Rod Stewart helped take some of the fear away.

Through funding from Beatson Cancer Charity, one of NHS Greater Glasgow and Clyde’s clinical technologists, Hilary Sturrock, painted an image of the famous singer on Joan’s beam direction shell.

Joan, 61, from Paisley, was treated for cancer in the chest area, which involved wearing a specially fitted shell over the chest area to keep her still during treatment. Joan said:

“When I went into the Mould room to be fitted for my shell, I saw all of the childrens’ radiotherapy masks with their favourite superheroes and characters painted on them.

“I said to one of the technicians, as a joke, that I wouldn’t mind if Rod Stewart was on my shell!”

When Joan seen her shell again there was a portrait of the singer on it. She said:

“It was such a surprise! Hilary had painted a picture of Rod on it for me – it looked fantastic. I was so overwhelmed and couldn’t believe they had done this for me, and I do think it helped take some of the fear away.

“I’m Rod Stewart-daft - I’ve got cardboard cut-outs of him! I met him once in Glasgow years ago, when he was playing a charity football match. I couldn’t speak, but I managed to get his autograph.” 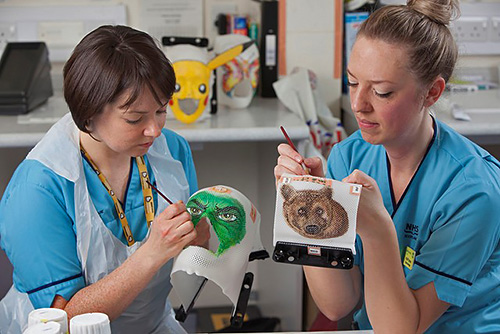 “So far, the painted masks have mostly been for young children. I am thrilled when I get a request to paint an adult mask, as the theme can vary from tattoo designs to music icons.

“I hope I achieved a good likeness of Rod Stewart, as portraits are a challenge to paint on the masks and require intricate detail. However, this was very enjoyable, and I was pleased with the result. I’m delighted this helped Joan through her treatment.

“If Rod sees this, I hope he’s happy with the likeness too.”

Joan was treated at The Beatson West of Scotland Cancer Centre, where she said the staff “were fantastic and made her feel at ease”.

Hilary and her colleague Fiona McCulloch have also transformed several radiotherapy masks into superheroes and characters for younger patients to help combat their fear of treatment.

“We’re delighted to be able to fund such an incredible project that’s helping to make a positive difference to patients.

“The portrait of Rod is fantastic – I’m sure he’d approve!”

You can find out more about the incredible creations The Beatson clinical technologists have created, or read more Beatson Cancer Charity updates.