A new cafe in the Glasgow Dental Hospital and School has been in the global spotlight recently after its official opening was attended by media from around the world.

The new Street & Arrow cafe is serving up second chances for former offenders and those who have been involved in violence and want to turn their lives around.

International media including the Financial Times, BBC, The Times – and even the Washington Post – were in attendance to learn more about our role in helping people transform their lives. 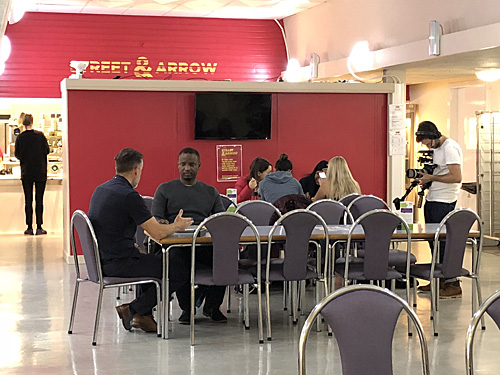 The trainees, managed by experienced catering staff, work in the cafe for 12 months and have the option for ongoing support once they have completed the programme.

As well as receiving a regular wage, participants get mentoring to help them stabilise their lives and deal with issues as diverse as staying sober, housing, family or relationship issues or creating a CV.

Our Director of Regional Services, Gary Jenkins, said: “As a Board, we are committed to supporting people who can face barriers to gaining employment.

“Not only does this partnership provide an excellent opportunity for us to help job seekers; it is also providing a fantastic new cafe for our patients and staff at the Dental Hospital.

“It is already proving very popular thanks to the very high standard of catering and I’m sure it’s popularity will only continue to grow.”

The cafe was officially opened by Humza Yousaf MSP, the Cabinet Secretary for Justice, who said: “Back in the day many victims of knife violence and serious assault would end up in the Glasgow Dental Hospital to have the damage done to them repaired by specialist surgeons.

“Now, instead of getting stitched up in hospital, those previously involved in crime are there for a job and the support they need to get back on their feet. It shows how times have changed.

“Recorded violent crime has nearly halved across Scotland in the last decade and we’ve seen a parallel fall in the number of emergency admissions to hospital resulting from assault. 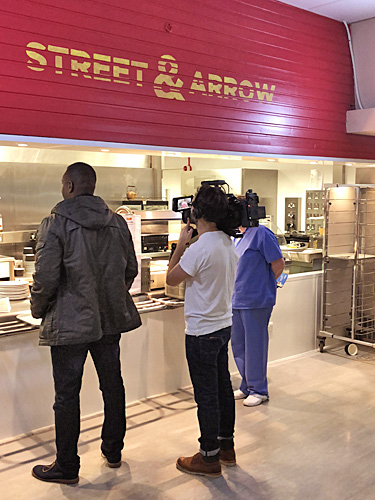 Street and Arrow was developed from the Scottish Violence Reduction Unit, established as part of Scotland’s public health approach to tackling violence, which was recently recognised by the World Economic Forum.

Director of the Scottish Violence Reduction Unit, Niven Rennie, said: "Street & Arrow dishes out more than just good food, it also serves up second chances for people who want to change their lives and break free from the cycle of violence.

“The best form of health care is prevention and the Glasgow Dental School and Hospital are helping to stop the revolving door of violence in our A&Es by giving people hope and opportunity.”

Callum, who successfully completed a year with Street & Arrow and was kept on as a trainee mentor, said: “Street and Arrow gave me hope in the future. I’m now a mentor helping guys just like myself and it is the most rewarding thing I have ever done.

“The ripple effect from the SVRU helping me is massive. My family get the benefits, my community and I’m no longer a drain on the NHS or in prison. Everyone at the SVRU has helped me get to a place I never thought was possible where I have peace in my life.”