Parkhead closes after 30 years of service to the community

Parkhead Hospital was officially opened on 20 April 1989 by the late Princess of Wales and was the first new psychiatric hospital in Glasgow for more than 80 years.

It has now closed its doors for the last time, but the memories of the staff who have worked there will remain. 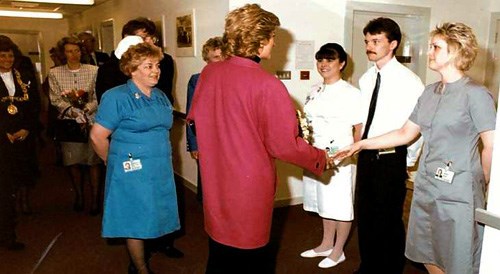 We chatted to senior charge nurses Yvette Wilson and Cathy McAuley about what made Parkhead so special...

“Sometimes, the memorable achievements are not those greeted with fireworks, news headlines and glitter – they are the more humble, ordinary day-to-day successes achieved by people who bring their hearts and souls into their work and who routinely go the extra mile – and do it with a smile.

“Not even its staunchest allies could ever describe Parkhead Hospital as a thing of beauty. It was built in the late 1980s as an acute inpatient service to replace wards in Gartloch and Duke Street Hospitals, but the building was small and cramped and had very little therapeutic outside space.

“However, there was nothing small about the energy, vigour and personalities who gave Parkhead its identity. Some are no longer with us, but others continue to promote working collaboratively with patients and their families, sharing the loads, the joys and the sorrows.

“As one patient explained in an email in 2015: ‘I cannot overemphasise the effect that your care, friendship, empathy, understanding and all the one-on-one chats that I had has had on me. I arrived at Parkhead very unwell and very mixed up. I left clear-headed, focused and ready to face everything. All thanks to you all.’

“Working in Parkhead often felt like negotiating your way through an extended family – and like all families, there were arguments and bust-ups, but the ties were stronger than the disagreements.

“The commitment to the people of the east end of Glasgow underpinned the delivery of care and the patients and their families joined in many of the activities and initiatives that are still talked about – the sports activities, raffles, ward parties and presentations.

“Although the building will go, the spirit of those who called Parkhead Hospital their working home will live on.”

Services have now relocated to two refurbished wards on Stobhill Mental Health Campus, to be known as Munro Ward and Nairn Ward.