End of treatment bell dedicated to ‘Princess of The Beatson’ 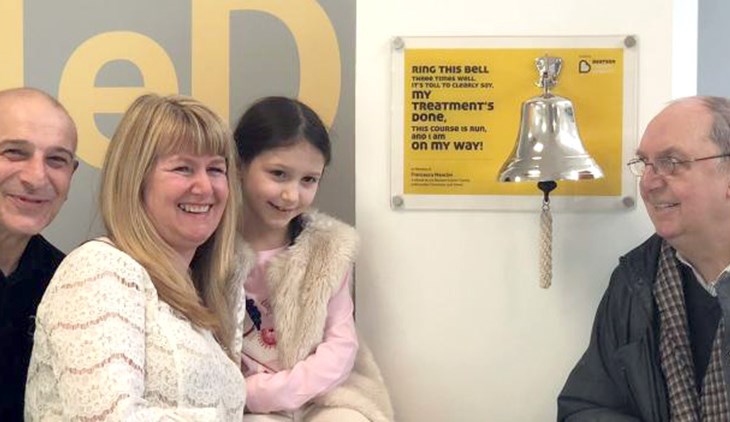 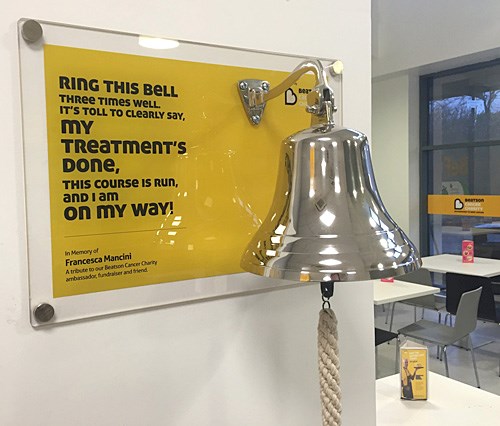 The bell, which is situated in Beatson Cancer Charity’s café in the Tom Wheldon entrance of Gartnavel General Hospital, is there for patients to ring when they finished their last round of cancer treatment. Unveiling the bell was Francesca’s mum, May, dad, Osvaldo, little sister, Chiara and grandad, Jim. May said:

“Everyone knew Francesca at The Beatson, and this bell will help keep her memory alive and give patients hope, whether they’re at the beginning of their cancer journey or the end.

“We hope that seeing and hearing patients ring the bell will also give people strength to keep going. And the fact it’s in the café will mean that more people will hear it and understand what it means.

“We’re so grateful to Beatson Cancer Charity for doing this, and for everything they did for Francesca.”

Francesca was an exceptional young lady who did so much for the charity, making a real, lasting difference to thousands of people across Scotland. Throughout her cancer journey she remained positive and determined, but sadly lost her battle with non-Hodgkin lymphoma in September 2016. 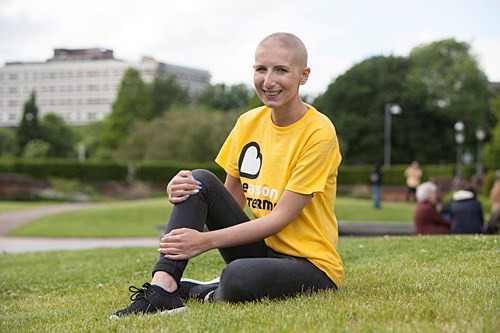 Francesca will be remembered for many wonderful things by lots of people who had the pleasure to have known her, and this new bell will be yet another reminder. Osvaldo, who works in the café, was there when the bell was rung for the very first time. He said:

“I felt so much pride and happiness for them.

“It will add to the good feeling the café already tries to bring – creating a bit of hope and warmth to people who need it and might not get it anywhere else.

“Everyone needs love and support and that’s what Beatson Cancer Charity is here for, and we’ll never forget that.”

“We are delighted to have unveiled the ‘end of treatment’ bell in the Beatson café in Francesca’s memory.

“It has already become the centrepiece, and we hope it will help bring support and strength to patients.”