We've thrown our weight behind a national bid to make the country tobacco free by 2034.

In the run up to the signing, Glasgow artist Josie Vallely ran workshops with children who were inpatients and outpatients at the hospital.

The end result was a an activity resource promoting key facts about the impact of second-hand smoke with an emphasis on children and families and smokefree signage to be used across the hospital grounds.

That signage is now installed throughout the play park and has been designed to appeal to children in the same way as a treasure hunt would where they have fun ‘hunting’ out the signs while also learn about the dangers of smoking.

Linda de Caestecker, our director of Public Health, and board member John Matthews OBE signed the charter which apsires to further help drive down smoking rates.

Despite the continuing drop in smoking rates across our area, smoking remains the biggest single preventable cause of ill-health and premature death in Scotland.

Half of our smokers want to quit for good, while a third of deaths amongst those aged 35 to 69 across the area are caused by smoking.

Tobacco use accounts for almost 25% of all deaths in Scotland, is responsible for around 33,500 hospital admissions annually and the NHS has to spend around £400 million each year treating smoking-related illnesses.

John Matthews OBE, chair of the board’s Public Health Committee, said: “Tobacco is still the most common preventable cause of death in Scotland with smoking to blame for around a quarter of all deaths.

“Signing this charter is important as it shows our continued commitment to reducing smoking and our determination to ensure that all children will grow up free from the harmful effects of tobacco.

“Our work already focuses on key charter principles and by signing the ASH Scotland charter we are committing the board to further sustained action to reduce tobacco-related harm by encouraging people not to start, supporting them to stop or protecting them from tobacco smoke.” 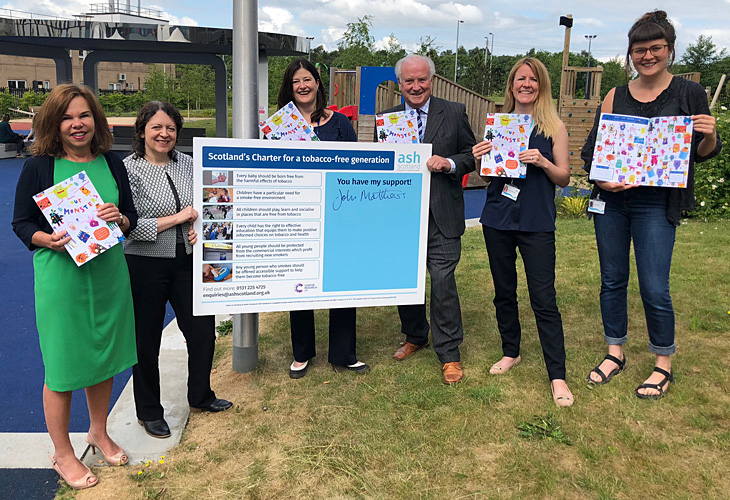 “Every child has a right to have the best start in life and growing up in a smokefree environment is an important part of that.

“We deliver a range of tobacco control programmes in schools, support the expansion of smokefree environments such as playgrounds and offer support to people who want to make their home smokefree.

“Every year, the number of people using our Quit Your Way service in a bid to kick their smoking habit is large enough to fill Hampden stadium.

“However, we know quitting smoking isn’t easy. That’s why we offer world class smoking cessation services in local community venues and in all pharmacies.”

Sheila Duffy, chief executive of ASH Scotland, said: “Scotland has a vision of making smoking unfashionable, with fewer than 5% of the population still smoking by 2034. It’s a compelling vision and one worth striving for.

“If we all work on this, the children who are just going into nursery school now can be the first generation to grow up free from the harm caused by tobacco. ASH Scotland welcomes NHS Greater Glasgow & Clyde in joining us in our work towards a generation free from tobacco.”

Smoking is linked to many illnesses and long-term conditions, substantially increasing the chances of developing lung conditions, heart disease, strokes and cancers.

Tobacco smoke contains approximately 4,000 chemicals many of which cause cancer. Carbon monoxide and tar are the most toxic chemicals smokers inhale. Others include:

Anyone looking for help to give up smoking can access a wide variety of services to suit their needs by visiting the Quit Your Way section of our website.