Glasgow’s favourite wrestler has joined forces with Beatson Cancer Charity to launch our main event of the year Off The Beatson Track! We are appealing to as many people as possible to get involved.

On Sunday 26 August, the charity is going ‘Off The Beatson Track’ for the fifth year running and is aiming to raise vital funds for patients and families affected by cancer. 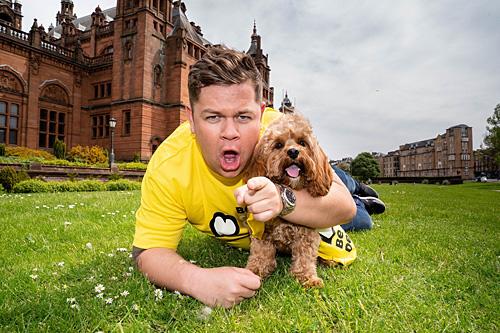 Wrestler Grado, who has also featured in BBC Scotland’s River City and Scot Squad, joined Bella Beatson, Ruadh the dog and children from Glenboig Primary School to launch the event at one of the iconic landmarks walkers will pass on the route.

“I’ve known The Beatson since I was young because my mum was treated there. She would always come home positive and be telling stories about the people she’d met. That rubbed off on me and I always remember her being happy rather than sad.

“Beatson Cancer Charity provides vital services to patients and families going through a very difficult time, and I want to support that.

“Everyone should sign up to do Off The Beatson Track – it’s a great family day out. It’s for all ages and you can take your dog! Plus it’s raising money for a fantastic charity.”

The 10k walk is along fully-accessible paths and will start and finish at Glasgow’s Riverside Museum, taking in some of the West End’s iconic sights and The Beatson West of Scotland Cancer Centre, which the charity supports. Some 2100 walkers signed up to take part last year, so for the fifth anniversary the charity is hoping to break that record and make this year the biggest and best yet. 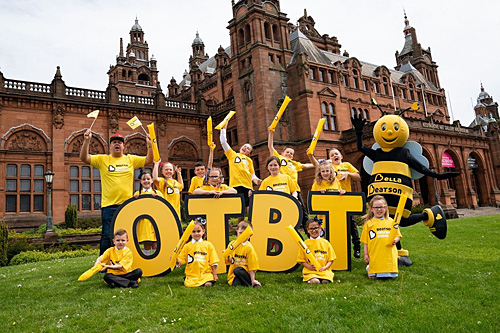 “This is a truly fantastic event and a real spectacle to see thousands of our supporters walking through Glasgow’s West End in their famous Beatson yellow t shirts.

“It’s overwhelming to see how many people have taken part in this event over the past four years and Beatson Cancer Charity is extremely grateful for the support.

“Help us make the fifth anniversary bigger and better and let’s turn the West End yellow!”

Glenboig Primary School, Ruadh the dog and the charity’s very own Bella Beatson will all be taking part on the day and look forward to seeing as many people there as possible.

Q and A with Ward Volunteer Tracy