More than 1000 groundbreaking research projects have put a Scots city on the global research and development map - and raked in £21 million.

A futuristic phone app which can detect the onset of a psychotic episode, new drug trials and the use of electrical stimulation to assist walking are among medical projects pioneered in Glasgow.

NHS Greater Glasgow and Clyde yesterday hailed the leading-edge medical projects, saying they had helped to bring jobs and investment in to the city.

Professor Julie Brittenden works both as a vascular surgeon for NHSGGC and as a research professor for Glasgow University.

And as the health board’s Research and Development Director she also leads the growing clinical research programme.

The professor said: “There is a real dynamism here. I think the Queen Elizabeth University Hospital has been a catalyst for change. It has inspired people. In the last year we have had a 28 per cent increase in the studies we are supporting.

“Often drug companies or researchers have a product, usually a drug, they want us to test. People may have a very rare disease or a more common disease but with rare markers and this drug hits that specific target. Targeted therapies are more and more common.

“If you give a drug it can have a good response rate in some people but very little in others yet all the side effects and toxicity of that drug, We try to find out why people respond differently, what makes some cancers different for example. Now we have drugs coming out to specifically target these cancers.

“It really is cutting edge and we hope it results in much greater treatment success rates.

“It is the same for MS studies, we try to see which patients with MS have frequent relapses and which have a more chronic condition to help target treatment and reduce the side-effects. It is all about not giving a patient a drug which would not have any benefit.” 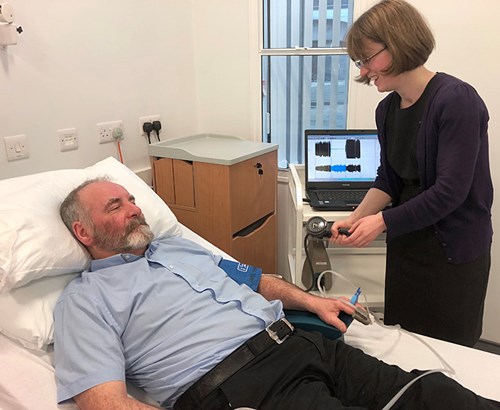 The research being done in Glasgow is shortening the time between discovering a drug and getting it on to the market.

But other studies where two drugs are compared against each other would not necessarily be of benefit to a commercial firm. And this is where charity and government research is vital.

Brittenden said: “The other great thing about non-commercial studies is we often look at how things are run in the NHS, very pragmatic studies which look at improving health care and how it is delivered. There has been real change in the past 10 years with outcomes, and treatment is more patient centred.”

And she revealed: “The results of a Cancer Research UK study carried out at the Beatson presented in America will show three months cancer therapy after colon surgery appears to offer the same survival benefits as patients having six months which means patients will only need to have half the treatment.

“This is good news because some of the cancer drugs create toxicity especially neurotoxicity which persist after treatment stops.

“A much shorter treatment regime improves quality of life.”

In the past year 10,000 people from the Glasgow area have taken part in trials.

Brittenden said: “People who take part in clinical trials tend to have better outcomes. Even if they have a placebo they have more follow up visits and feel they are part of a team.

“A lot of the time when we ask patients to take part they say they are doing it to improve other people’s care. They are so altruistic. They just think it may improve the lives of family or friends with the condition in the future even if there may be no benefit to them.

“By far our biggest asset is our patient population and their willingness to take part in research.”

But the innovations being developed in Glasgow are every bit as exciting as new drugs and treatments.

One is Empower. Using an app designed in Glasgow, patients who have or have had psychosis monitor their moods and how they feel.

Brittenden explained: “This feeds back to a care team and will send a trigger to the team if this person is at risk. If a person is doing really well they will say ‘you are doing great we don’t need to see you’. It may enable patients to become more in charge of their care thanks to an app on their phone.

“We are looking to see if these apps can improve patient care and help the research teams know who is more at risk.”

Another app developed in Glasgow monitors a person’s sight.

Brittenden said: “It is particularly useful for patients at risk of developing a sight problem like age macular degeneration, glaucoma or diabetic retinopathy. The app can look at the back of the eye and warn if a problem is developing.”

The development of successful apps is not only of benefit to the patients but can be a money-spinner for the university and health board. And the money generated is reinvested in further research and development.

One purchase is the 7T MRA ultra-high resolution scanner which is the first in the UK in an NHS site and the only one in Europe in a hospital. Glasgow University has bought the scanner to use it in a new way to assist in precision medicine. The more detailed information may makes it is easier to see which patients are at risk of conditions such as dementia, schizophrenia or multiple sclerosis and enable treatment to be started at the most appropriate time.

One pilot study at Glasgow Caledonian University is looking at electrical stimulation to assist walking.

Another is examining the use of nanoparticles to go to an area of the brain to improve oxygen supply after a stroke and a third is examining whether damage to smaller blood vessels can lead to fatal heart attacks.

Brittenden admitted: “It is really difficult to say which one is the most important, they are all working in different specialty areas and involve conditions which are really relevant to patients.

“But we are the global leaders in an asthma study, we are world leading in certain areas like heart failure and we have got outstanding researchers in rheumatoid arthritis and cancer.”

And as the city’s reputation is growing so, too, is the investment from companies seeking its expertise.