A new campaign raising public awareness of the 'silent killer' sepsis has been launched by Scotland's health secretary Shona Robison.

The campaign will educate people about the warning signs and symptoms of the life-threatening condition, which kills around 3,500 people in Scotland every year.

Shona Robison said: “The Scottish Government is committed to raising awareness of the dangers of sepsis. One person every four hours dies as a result of sepsis which is why it is so important this campaign, backed by £70,000 Scottish Government funding, will highlight the symptoms of this often-silent and often-deadly condition to millions of Scots.

“While mortality rates from sepsis have fallen by 21 per cent since 2012, there is still more to be done and I am confident this campaign will play its part in equipping the public with a better understanding of the signs and symptoms."

The campaign will reach more than 1.3 million people across the country, and every community pharmacy in Scotland will display posters warning of the signs of sepsis.

Specific materials will be displayed in GP surgeries and hospitals to complement work being done through the Scottish Patient Safety Programme to also raise awareness among healthcare teams.

It is being delivered in partnership with sepsis awareness and support charities Fiona Elizabeth Agnew Trust (FEAT) and Finding Your Feet.

Craig Stobo, founder and chair of FEAT, lost his wife and their unborn daughter to sepsis six years ago, and has called it a "milestone day" for sepsis awareness in Scotland.

He said: “We have pressed for the need to raise awareness of this killer condition and are confident that this Scotland-wide campaign will be a game changer in increasing the public’s understanding of the symptoms of sepsis and the quick action needed to save lives.

“We are proud to provide additional funding for this vital campaign and while we can’t bring back those lost to the condition, we dedicate this campaign to them and pledge to continue working towards the eradication of sepsis.”

Professor Kevin Rooney, consultant in anaesthesia and intensive care medicine at the Royal Alexandra Hospital, has been at the forefront of the fight against sepsis in Scotland.

Welcoming the campaign, he said: “Sepsis is an indiscriminate killer of people. It is one of the leading reasons why young women die in pregnancy.

“It cuts across people of all ages, backgrounds and social status, yet many people don’t know anything about it.

“Health professionals in Scotland are now much more geared up to look out for the signs of sepsis in seriously ill patients, who are scored and monitored as part of an early warning system in emergency departments.

"Prompt recognition, assessment and timely treatment are key to beating this ruthless disease.

"Rapid initiation of simple timely interventions, including antibiotics and intravenous fluids, can reduce the risk of death by half.

“The earlier that patients themselves recognise the signs of sepsis and take action the better and I urge everyone to heed the campaign and the important advice it gives.” 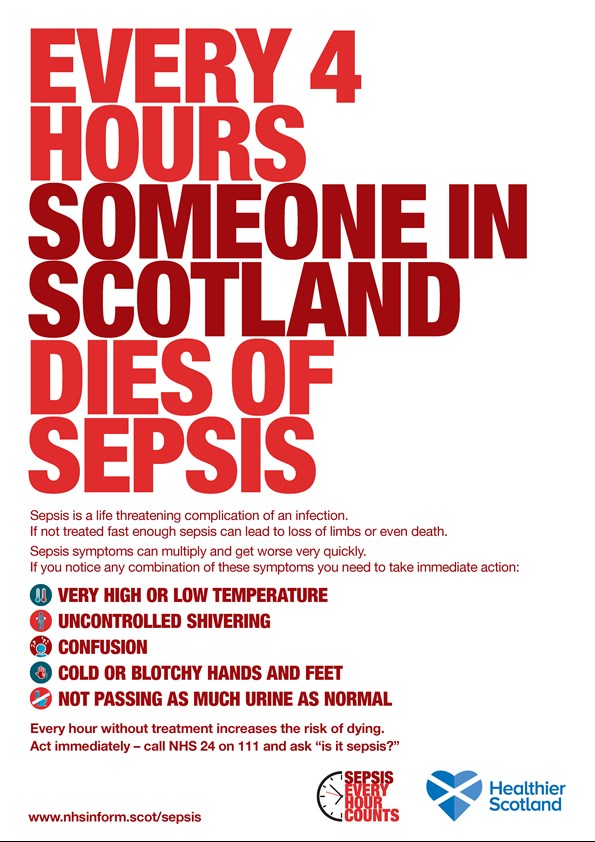