Parents are now being given the opportunity to enjoy precious first time experiences with their seriously ill children as a result of groundbreaking work at the RHC – the only work of its kind in the UK.

The hospital’s Paediatric Intensive Care Unit (PICU) is leading the way in the UK by being the only one working with its patients – many of them on ventilators - and their families to embrace early movement.

This has led to families being able to share a number of key milestones. Parents have been able to spend time with their child outside for the first time or get their very first family photo where the child isn’t confined to bed.

The Move on Ventilation Early (MoVE) programme was a year in the planning with the aim of tackling Intensive Care Unit (ICU) acquired weakness that can quickly affect seriously ill patients confined to a hospital bed.

In addition to having children moving sooner, the aim is for MoVE to lead to shorter stays on general wards once patients have been transferred from PICU due to a lower prevalence of ICU acquired weakness.

Nicola Norrie, from Alexandria, spoke after her three year old son Iain was due to be discharged to a general ward after 10 weeks in PICU.

She said: “In the past, Iain would usually leave PICU and go to the general ward without any intervention from the physios, which meant he stayed on the ward for longer.

“We’re now preparing for his move out of PICU and we can’t believe how well he’s doing with his strength and co-ordination.

“MoVE sets daily goals – even when Iain has been ventilated and heavily sedated – which means we have been getting him up for cuddles and getting him out of bed which has made an incredible difference.

“The programme enables the whole family to be involved in Iain’s recovery and his sister comes in to play with him which is great. Being able to play a big role in in Iain’s rehab is a new thing for us and we’re really enjoying it.

“We’re hoping that, thanks to MoVE, Iain will have a shorter stay on the general ward and get home earlier which would be incredible.”

Jenna Hills, specialist physiotherapist at the RHC, attended a conference in Baltimore last year to learn more about the work hospitals in North America were doing in tackling ICU acquired weakness in children.

She said: “There is widespread recognition of the risks of ICU acquired weakness in adult patients such as muscle weakness and psychological trauma during long stays, however there is a lot less knowledge in the UK when it comes to children.

“We spent more than a year developing MoVE and worked with every single discipline involved in PICU to ensure that every service involved in patient care had an input into the new way of working to ensure patients got the maximum benefit.

“I attended the conference in Baltimore – the only one in the world to have a paediatric aspect – and we’ve taken expertise from that and built on our own learning. 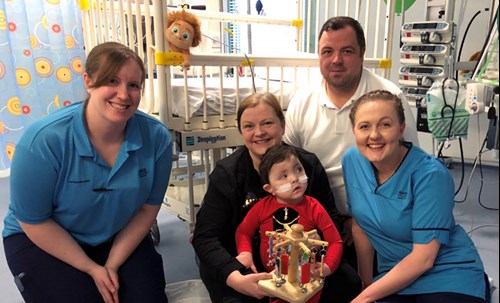 “We’re the only PICU doing this kind of work in the UK and have already been approached by children’s hospitals in Nottingham, Leicester and Belfast looking to learn from our experience.

“Parents whose children have been treated in the unit before and after we started MoVE say they see a big improvement in their children after taking part.

“It’s also hugely beneficial for parents as they are more involved in their child’s care and play an important role in deciding which activities the children participate in.

“Parents are now carrying out more than 50% of the activities which is great as it means they are now having more hands on engagement with their children which they couldn’t always do in the past.

“The MoVE initiative has made a big difference to the health of a number of our patients so far and that has only been possible thanks to the ongoing full support of all the PICU staff. Every member of the team has been so supportive and helped to adopt MoVE activities into the patient's daily routine.”