A blether and a cup of tea for memory loss patients 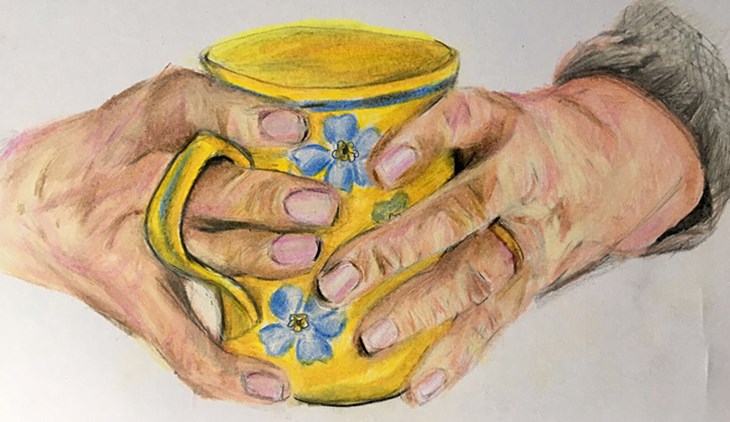 A new café which runs once every six weeks is bringing fun, laughter and music to patients in Glasgow Royal Infirmary who have been diagnosed with a form of memory loss.

Whether it be dementia, Alzheimer's or another form of cognitive impairment, patients are coming together for a couple of hours with staff and their families or carers to sing, have tea and a blether to help stimulate old memories and create new memories.

The idea of having a ’dementia café’ which brings together patients who have been admitted to hospital as a result of a medical issue and have also been diagnosed with a form of mild or severe memory loss was the brainchild of Louise Colquhoun and Alan Cook.

Louise is a co-ordinator for the volunteer programme and Alan is Practice Development Nurse for Older People. Both are dementia champions and wanted to provide an event that would bring patients out of the ward setting and into an area where they could look at pictures and hear songs that would bring back memories and that they could chat to other patients with the same impairment.

The café has proved to be a great success with the patients, patients’ families and carers, and the staff who join in.

There is also the opportunity to offer families and carers advice and support.

Alan says the change in some patients is remarkable and the staff see this when they go back to the wards.

He added: “The opportunity to speak to family and carers is invaluable, it allows us to signpost them to support and advice they may otherwise not have known or thought about.

“If we can spread the café's success and encourage other hospitals to do something similar it would make such a difference.”

Louise said: “The dementia café allows patients to leave the acute medical environment for a couple of hours to socialise, and pass the afternoon with music, games, chat and a nice cup of tea.

“I am always surprised by the participation of some of the patients. We have had a 93 year old gentleman stand up and sing us a song as he was a singer in working men’s clubs in his younger days. There really wasn’t a dry eye in the place! For this gentleman to showcase his talent and reclaim his identity, and for his family to witness this really makes it all worthwhile.

“The hospital volunteers are really pivotal to our café, they sit and blether with the patients who come down alone, play quizzes and cards with them and the patients return to the ward after an engaging afternoon.”