For many children, MRI scans can be a very frightening experience with large, noisy machinery in an unfamiliar environment.

Thanks to the generosity of HSBC Hamilton, Glasgow Children’s Hospital Charity has enhanced the Imaging Preparation Suite at the Royal Hospital for Children in Glasgow to help young patients learn about their upcoming MRI scans.

This suite includes Scotland's first 'Kitten Scanner', a miniature version of a real MRI scanner which shows children how an MRI scanner works.

The Kitten Scanner will be operated by the hospital’s dedicated Play Team. The team does this with a series of animal toys which, when placed under the scanner, trigger a story that is relayed to the children explaining how the scan works and outlining why they need a scan. The scan then shows the ‘insides’ of the toy animal which further clarifies the scanner’s purpose.

At the Royal Hospital for Children one in five MRI scans or CT scans are carried out while children are under general anaesthetic due to anxieties about the procedure.

The aim of the ‘Kitten Scanner’ is to remove the fear, stress and anxiety associated with the procedure and therefore reduce the amount of general anaesthetic admissions required. This should hopefully reduce the amount of time children need to spend in hospital for an MRI scan, and allow them to have a more positive experience in hospital. 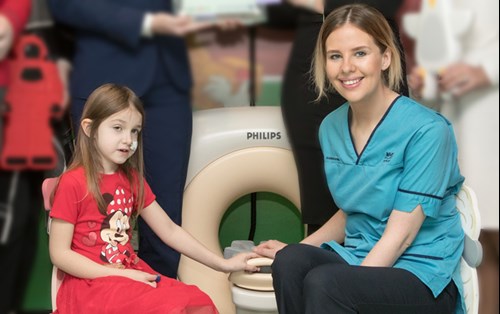 Amelie Trotter, a six-year old patient at the hospital, is just one of thousands of patients who will benefit from the Kitten Scanner. Her Dad, Walter Trotter, can already foresee the benefits this will have for his child and others in the hospital:

“When we first attended the hospital Amelie was just three and, as you can imagine, she was petrified of the scan and the scanner itself. This meant most of her scans were being carried out under general anaesthetic, resulting long days in hospital and a stressful time for everyone.

"There is an obvious benefit to get the kids to a stage when a general anaesthetic is not required, and I’m sure this equipment will be very much appreciated by everyone who benefits”.