Why Gordon is banging the drum for the NHS

Gordon Wilson has been around the world touring with major acts including Susan Boyle and Dr Hook.

However, it was a robot at a hospital just minutes from his front door that performed a life changing operation on the musician best known as the drummer of two seminal Glasgow bands, Love and Money and The Blue Nile.

Gordon was diagnosed with prostate cancer last October and had the choice to opt for radiotherapy or undergo surgery.

Until recently, men with prostate cancer had few surgery choices. Previously, the only surgery option was open prostatectomy, which involved surgeons making large incisions and the patient experiencing a number of side effects.

Traditional surgery would see the entire cancerous prostate being removed with a risk of heavy blood loss, post-op infections, long hospital stays, and considerable pain. Patients were often affected by a loss of bladder control and sexual function due to delicate nerves around the prostate gland being severed.

However, Gordon had the opportunity to attend the West of Scotland’s regional centre to receive a new less invasive robotic prostatectomy. Based at Glasgow’s Queen Elizabeth University Hospital (QEUH), the service uses the da Vinci robot to carry out the procedure.

He said: “I met with the surgeon, Mr Imran Ahmed, and he outlined that in my case this new robotic surgery may be the best option.

“I read as much information as I could on the da Vinci robot to fully understand how it has moved on from traditional surgery and to learn the advantages of choosing that course of treatment."

The da Vinci robotic prostatectomy enables surgeons to overcome many of the shortcomings of traditional prostate surgery and is a less traumatic and minimally invasive prostate cancer treatment.

It uses finely controlled robotic instruments to perform the operation safely and leads to better patient recovery and outcomes. Sitting at the da Vinci surgical console in the QEUH, Mr Ahmed controls the robot which is made up of high-resolution cameras and micro-surgical instruments. Powered by state-of-the-art robotic technology, his hand movements are translated into precise movement of the instruments. 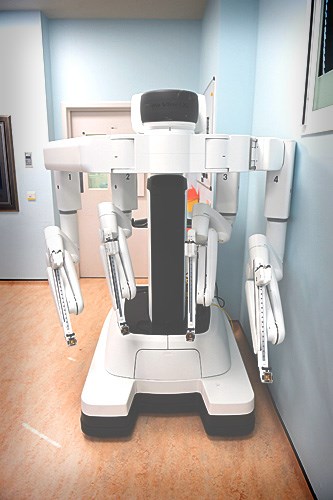 Gordon said: “I read a lot about Mr Ahmed and how highly regarded he is and his full endorsement of the robot was encouraging. He has been involved in around 350 procedures using the robot which was also reassuring.

“For the procedure you’re talking about fractions of a millimetre and with that level of precision the robot can make a huge difference. The lack of side effects was a big factor in my decision to go with the robotic prostatectomy as there is a marked difference in recovery time and lack of nerve damage using this method.

“I stayed in the QEUH for two days following the two hour surgery and had an appointment in July as part of the post-op assessment where we discussed the results.”

Gordon was also grateful to individual staff and the regional service as a whole for his treatment.

“Before the operation I had doubts and worries which I was multiplying in my own mind. However, Alison, my Clinical Nurse Specialist, was brilliantly reassuring. She was amazing as she kept me fully informed and was always really encouraging.

“The very fact I’ve been able to have surgery through the da Vinci robot has been brilliant. If anyone in the West of Scotland diagnosed with prostate cancer has the opportunity to choose this surgery I would definitely recommend it.

“Even if you have to travel a little, don’t let that put you off. It’s absolutely worth it for the benefits the procedure delivers in terms of recovery time and less side effects.”

To read more stories about the fantastic work done by your NHS, register today!