As we celebrate our 3rd anniversary, we are highlighting the support we provide to patients through our Patient and Family Support Services. This is Geri’s story.

In 2016 Geri was diagnosed with breast cancer which came as a massive shock to her and her young family who found it extremely hard deal with. Geri went through a gruelling period of treatment at The Beatson while having to deal with family life at the same time; which was extremely tough on her mentally. She said:

“My brain is always ticking, it never stops, it is always saying you’ve got to do the shopping; you’ve got to look after the kids. It’s trying to keep going as normal and you are dragging the body along with it. So you get days when you can’t do it and the brain won’t shut off and the anxiety makes me start twitching and I get really frustrated.”

Since Christmas Geri’s cancer has spread and she is once again having treatment at The Beatson including chemotherapy. When Geri originally came to Beatson Cancer Charity for support it was through the Specialist Health and Work Service (SHAW) as her husband, Billy, was really struggling with his work and his employer understanding that he needed to be there for Geri and the family. His employers did not understand what Geri’s cancer diagnosis meant and they were not supportive of his need to take time off or be there for his wife and children. Donna from the SHAW team really helped him with his employer and they now have the right support in place to cope with this. However when you are told that you have to go back through treatment a second time it brings in a whole other level of stress and pressure.

“The stress of living every day knowing you have this clock ticking and you don’t know when it is going to stop and it is just this constant reminder and there is no way of getting away from the cancer or the knowledge the disease is back.”

With the support of the Specialist Health and Work Team, Geri has been referred to the Wellbeing Centre. She is using the complementary therapies to help her manage strss and anxiety and this is proving to be an incredible support to her especially as she deals with her treatment. 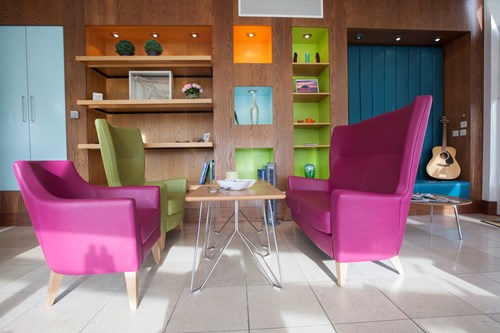 She said: “The Wellbeing Centre is tranquil and peaceful and it’s relaxing and welcoming. It’s almost as if you step out of that anxious jacket and you step in to this peaceful tranquil area and then you have forty five or fifty minutes of pampering where the brain actually shuts off and doesn’t constantly tell you that you have to keep moving. It’s not at loggerheads with the body saying you’ve got to keep going. You get the chance to lie there in peace and not think I’ve got cancer…it’s as if you get that peace that means you can pretend that none of this is happening. You are just normal."

Geri has also greatly benefited from the complementary therapies which our Patient and Family Support team carry out every day for patients.

“I had reflexology which is amazing because it just gets all the points. I can’t have any of the massages done because I have breast cancer… But if I say to the therapist can you massage my knees and ankles because they are really sore, the girls won’t say no, they extend it and it’s almost as if they are like nurses adapting to what I need relieving a lot of the pressure that is caused by all the treatment.

“There is a mental and physical benefit to the treatment. You don’t have that ache in the joints that you had when you went in. So you do feel good and a cloud disappears for a while and you can go for a walk and do things until it all swells up again.’

One of the special things Geri appreciates about the staff is how experienced they are and how much they empathise with the patients and families, making it a very special and unique place.

“The support from the therapists has been wonderful and I know how many patients they have to see and they don’t ever say no we can’t see you and you’ve had enough. They know it’s so important. It is such a relaxed atmosphere in the centre, there is nothing and nowhere like it.” 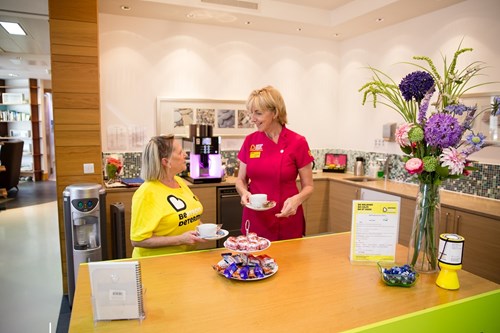 Everyone at Beatson Cancer Charity is so happy to see patients like Geri benefit from our services, but to continue this we still need vital support today.

Please get involved to help The Beatson by donating, volunteering, fundraising or by simply inspiring others by sharing your story.

8 wacky fundraising ideas you can do for 2017

Top 5 reasons to fundraise for the Beatson