The 27th of Feburary 2017 marks Beaton Cancer Charity's third anniversary and we can confirm that in our first three years we have secured a total income and planned expenditure of over £14 million in our determination to beat cancer.

Since launching on 27th February 2014, the £14 million raised has allowed the provision and expansion of a wide range of high quality patient and family support services and the delivery of many projects to benefit people affected by cancer including funding specialist clinical staff, world leading research projects, cancer education and awareness initiatives and innovative service developments.

With 30,000 people in Scotland being told they have cancer every year and trends predicting that this number is likely to rise to almost 35,000 by 2020, we will play an increasingly fundamental and critical role in the fight against cancer.

“The remarkable total raised is a true testament to the generosity of cancer patients, their families and the wider community in their commitment to raising funds to fight cancer. I would like to thank everyone who has fundraised and donated to help us make such a difference to the lives of so many people affected by cancer." 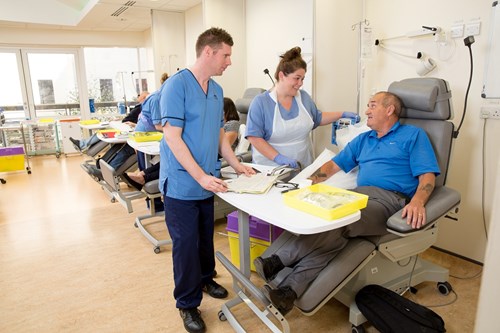 Many new and exciting initiatives are in the pipeline for the charity and David Welch eluded to his vision to expand their reach and impact even further, by offering more support to an increasing number of people affected by cancer.

He continued: “Although we have already achieved so much, there is much, much more to be done and the next three years will see further significant growth and development for the charity. The west of Scotland still has one of the highest rates of cancer in Europe – so the hard work is far from over. We hope that everyone will continue to show their support through fundraising, volunteering and donating to the charity as we are absolutely determined to do all we can to reach even more of those in need of our support.”

In reaching an increasing number of patients and families year on year, Beatson Cancer Charity has committed and planned expenditure on a variety of services and projects. This already includes a £6 million plus investment in providing the very best support for cancer patients and their families and over £4million committed to funding additional specialist posts across radiotherapy and nursing. Commitments to cancer research, education and new service developments amount to a further £4 million.

Over 56,000 visits have been made to Beatson Cancer Charity’s Wellbeing Centre over the last three years with over 25,000 complementary therapies provided free of charge to cancer patients across The Beatson West of Scotland Centre, Lanarkshire Beatson, Queen Elizabeth University Hospital, The New Victoria Hospital, Royal Alexandra Hospital and Vale of Leven Hospital.

£850,000 to a ground-breaking radiotherapy research project which will have a significant impact on survival rates and quality of life for cancer patients across Scotland and further afield.

£600,000 to the Specialist Health and Work Service that supports patients continuing their work during treatment and returning to work post treatment, advocates on their behalf in relation to employment and supports healthcare professionals to assist patients with work related issues.

8 wacky fundraising ideas you can do for 2017

Top 5 reasons to fundraise for the Beatson