Pensioner saved by "one in a million" nurse

The actions of one Glasgow nurse when a patient failed to show for an appointment proved to be a real life saver…and has resulted in her nomination for a special award.

Staff Nurse Jade Gilmore works in Townhead Health Centre in the East End of the city along with a team of colleagues who pride themselves on delivering first class patient centred care.

But one Friday morning it was when a patient didn’t turn up for treatment that her actions proved to be lifesaving.

Archie Robertson attends the surgery three times a week to have his leg ulcers treated and dressed. He had been on the Wednesday but when he didn’t show for his Friday appointment Jade became concerned about her 81-year-old patient.

She phoned him on his mobile and house phone but both just rang out.

As her concerns grew Jade called the nearby Glasgow Royal Infirmary to see if there was any record of Archie being admitted for unscheduled care…but that also drew a blank.

That’s when she phoned the caretaker of the flats where Archie lives and asked him to check on him. He called Jade back to say there was no reply but that he could hear the television on inside his flat…

That was the cue for an instant decision to call the police and ambulance to force entry.

Archie had fallen after returning home from his Wednesday visit to the surgery.

He’d been drifting in and out of consciousness on the floor of his living room – unable to move to call for help he’d gone three days without food or water. Archie had even given himself serious friction burns trying to drag himself to the door in his confused and semi-conscious state. 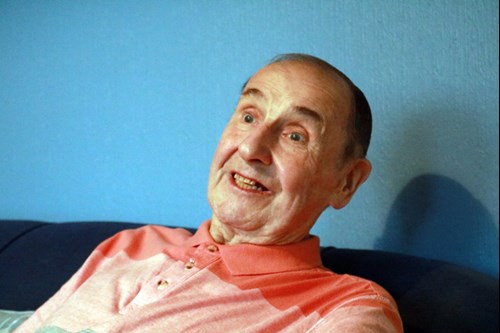 “I was in a very bad way – I wouldn’t have lasted another day”, said Archie a retired whisky distillery cooper.

“She and the rest of the staff at Townhead Surgery have always been wonderful to me but this time I owe my life to Jade – she is one in a million,” he added.

A nursing colleague nominated Jade for the 2016 NHSGGC Chairman’s Awards and she is one of many who have been short-listed by the judging panel. The Award winners will be announced on November 7th.

Jade said: “I was really pleased to be nominated and to be shortlisted is fantastic. I’m proud I was able to help Archie and ultimately his life was saved.

“I love the continuity of seeing the same patients regularly, it gives routine and structure to treatment and the patient relationship.

Archie always shows up, on the same days at the same time each week. And so when he didn’t show up, instinct kicked in and I just knew something was wrong and I had to investigate further."